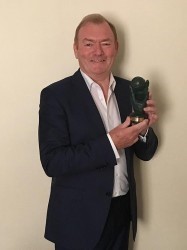 It is with great sadness that we have learned of Des Allen’s passing on 2nd December 2021.

Des is synonymous with Tennis in Ireland, having played from an early age and given so much of his time to the sport, both as a player, and professionally as Tennis Ireland CEO for 20 years.

On his retirement in September 2016, he said that “tennis has been my passion for most of my life and I feel privileged to have been able to work in the sport at this level for this period”. Des was content with the progression of the game in Ireland during these years, with the numbers participating in the game growing. He was particularly proud of his role in the development of the National Tennis Centre at DCU, with Ireland’s National Academy producing a generation of players capable of competing in Grand Slam tennis.

In recognition of his significant achievements, Des was presented with an award for services to the game of Tennis by the International Tennis Federation.

Many of you will know that Des has fought and won battles with cancer over the past 7 to 8 years and wrote a truly remarkable book “Wonderings and Ponderings” in 2017. All proceeds were used to raise funds and awareness for the Irish Cancer Society. In the book, Des writes of his childhood and how much fun it was – his funny stories are inspiring, and the book is full of wonderful chapters that will make you laugh and cry. This book is a magnificent act of kindness after everything he went through, and today’s news is perhaps a reminder, or lesson, for us all to live life, cherish it, have good experiences, friends who care, laugh and enjoy every moment with gratitude. And when life presents tough challenges, as it sometimes does, take them on and you will be a better person for it. Des certainly was that person.

Des was a member of Malahide for over 30 years and viewed it as his home in tennis. He was a very active member, playing Summer and Senior League throughout the 1990’s, and was Men’s Captain for 1995 -97.

He was elected as President of MLTCC in February 2020 and had great ambition and vision for our Club. This is evident from the 5-year Strategic Plan that he initiated and which was adopted by the Club in March 2021.

Naturally, Des had many lifelong friends related to the game and we sympathise with them today also.

On behalf of the officers, committee, trustees, coaches, club staff, and all members, we particularly offer our condolences to his wife Karen and his children Niamh, Aoife and Brian at this time and know that Des will be greatly missed and fondly remembered for his inspiration and generosity.