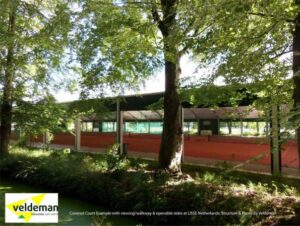 Members will be aware from previous communications and updates at the Annual General Meeting that MLTCC is exploring the feasibility of providing Indoor Tennis facilities at the club. This is a key part of the Strategic Plan which was adopted at the AGM in March.

By way of reminder, the proposal for Covered  courts is as follows:

Above are images of similar structures in  the Netherlands.

The Club has engaged Cummins & Voortman Architects to prepare a pre planning submission to Fingal County Council for Indoor Courts. The objective of this was to identify the relevant planning issues that may need to be addressed in a full application and whether it is a feasible project for the club. This work has reached a stage where we have now received feedback from Fingal County Council.

In essence, the main area of concern expressed by Fingal CC seems to be visual impact in a sensitive area which the Council considers an Architectural Conservation Area.

Having considered the matter in great detail and taking account of the positive views expressed at the AGM and as outlined in the Strategic Plan, the Management Committee have decided to proceed with a full planning application. This will be progressed over the coming weeks in conjunction with a range of additional communications with members, this being the first.

In parallel with this, we have also been working on consideration of potential improvements to the Clubhouse and over the next few weeks the Facilities Sub Committee and Management Committee will be working on further details of this part of the Strategic Plan. This work is at a very early stage and will take some time to be brought to any definitive point.

A big part of the work on these matters over the next few months will be to communicate with all members on progress and we will use various methods to do this, including newsletters, emails, meetings (probably virtually initially) etc. Execution and implementation of any significant works will not be started until approved by the members at an EGM or an AGM.

On Behalf of the Management Committee
28 May 2021